Let us explore Component Mode Synthesis (CMS) deeper. The method is also referred to as Substructuring or Superelements in other references. As the title suggests, we will be focusing on the Bottom Up approach.

The Bottom-Up method has been receiving more support in the Mechanical and Workbench interfaces in the 2022 releases and is now easier than ever to use your models.

To begin, let us introduce the assembly that we will be working with. See the image of the full model below. This assembly will be substructured to lower the computational intensity of the solve. 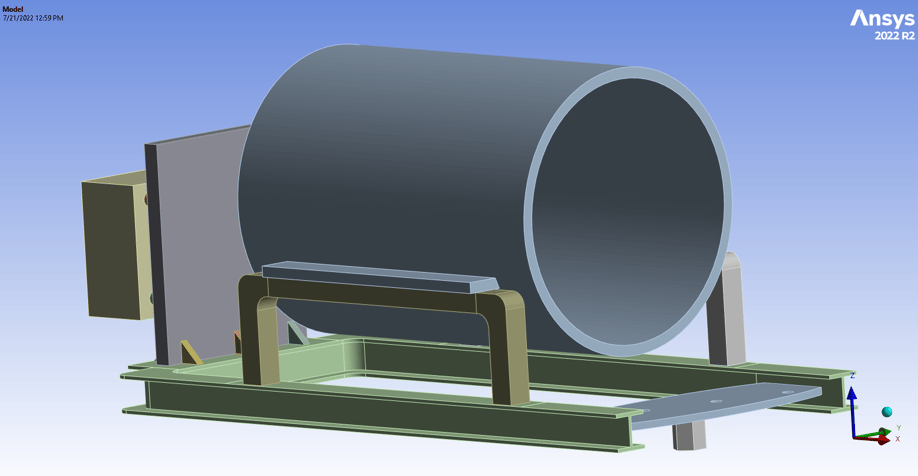 In 2022 R1, Ansys introduced the Substructure Generation analysis system into Ansys Mechanical. We are going to start by dragging it into the project area.

At this point, we should be able to load our geometry through SpaceClaim or Discovery as we typically would for our other analyses types. In this demonstration, I will generate a substructure for the large cylindrical object found in the assembly. For the sake of simplicity, we can import the entire geometry into SpaceClaim, Discovery, or Mechanical and suppress all components that we do not want to include in the substructure. From there, we identify that the cylinder object is connected to the rest of the assembly through the prismatic ledges on either side of the Y-axis. A named selection of the bottom faces of those ledges is made, renamed "interface_mid", then dragged and dropped into the "Substructure Definition" object. These steps are shown in the video below. Notice how the named selection appears in the worksheet after being dragged into the substructure definition. From there, we can perform a solve of this system. Ansys will essentially perform a modal analysis of the substructure with the named selection being treated as a fixed boundary condition. For higher frequency phenomena, it would be wise to include more modes in the solution. This can be done under "Analysis Settings".

After the system is solved we can now export the substructure. If we right click "Solution" and highlight "Export Substructure (.cpa)", we are presented with two options; Use Pass Only and Use Pass and On Demand Expansion (Beta). The latter is helpful if the user wishes to evaluate deformation/strain quantities as part of the final analysis, but requires substantially more disk space to save the .cpa file. Give the file a name and save it to a convenient location. In this example, it is named "middle.cpa". 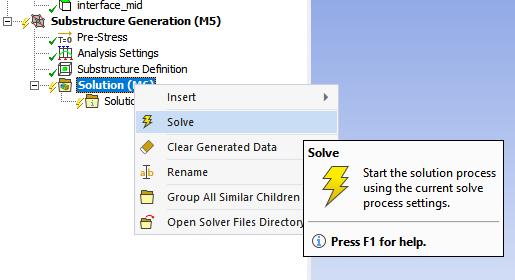 This completes the first leg of the workflow. It is to be repeated for each substructure the user wishes to include. In our case, I have performed this for the blocky posterior structure as well as the anterior plate found in the full assembly. 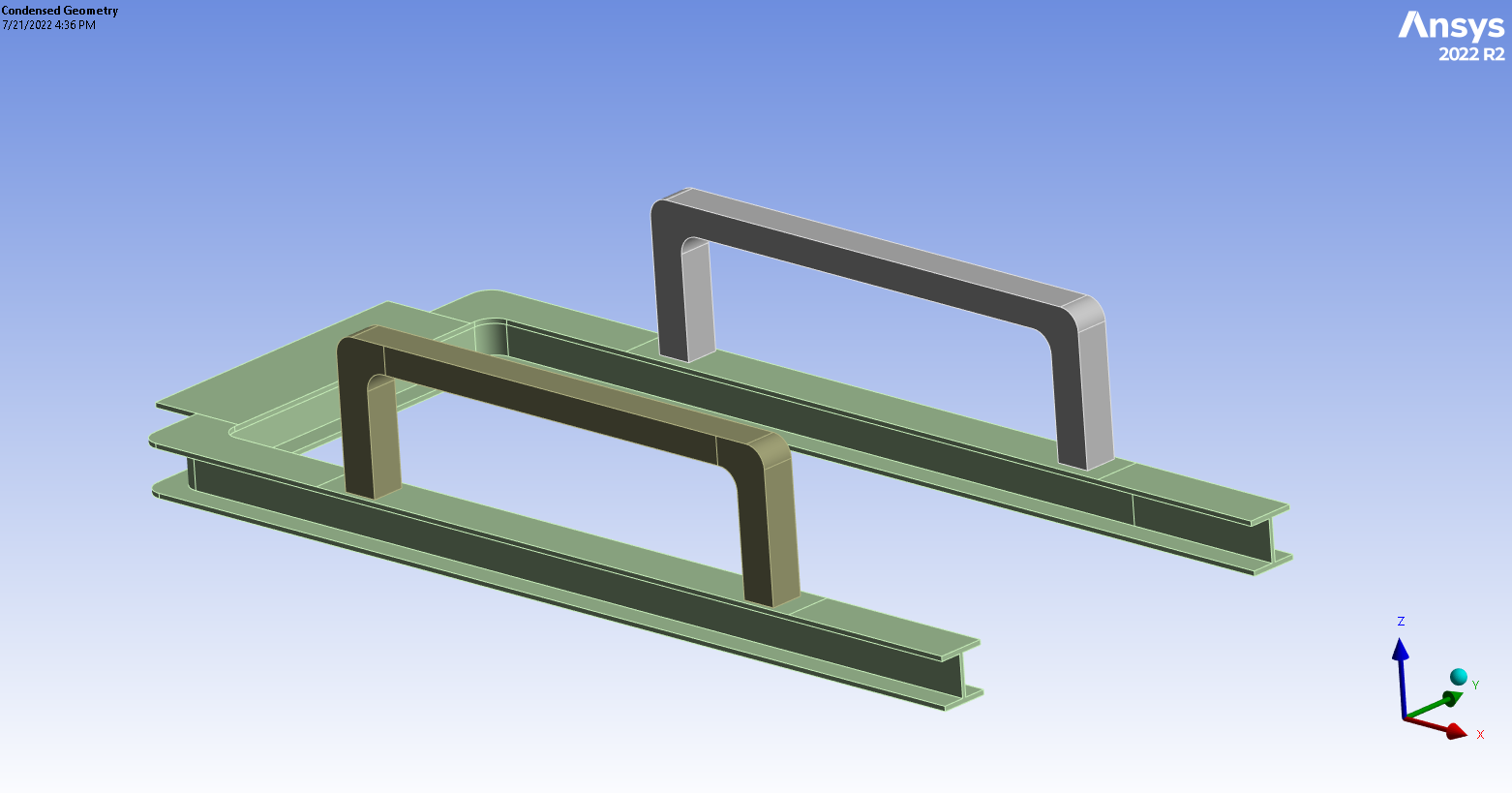 The next step is to create an analysis where the substructures will be imported. For the sake of demonstration, we will use a Modal Analysis that is then fed into a Harmonic Response. As before, we can import a full geometry and selectively suppress components. In this case, we have suppress items that were converted into substructures. See above.

From there, insert a "Condensed Geometry" object into the model then right click on and select Insert > Imported Condensed Part.

The details within the Imported Condensed Part reveals a yellow line indicating that it needs a user input. By moving the mouse over and clicking on the ellipses (the ...), a window opens that allows the user to navigate to the folder where they have saved their substructure file and click Select. We can then right click "Imported Condensed Part" and select "Import Condensed Part". This process may take some to finish time depending on the size of the substructure.

Ansys Mechanical returns a visual indicator of the substructure outlined in red when this process is complete. 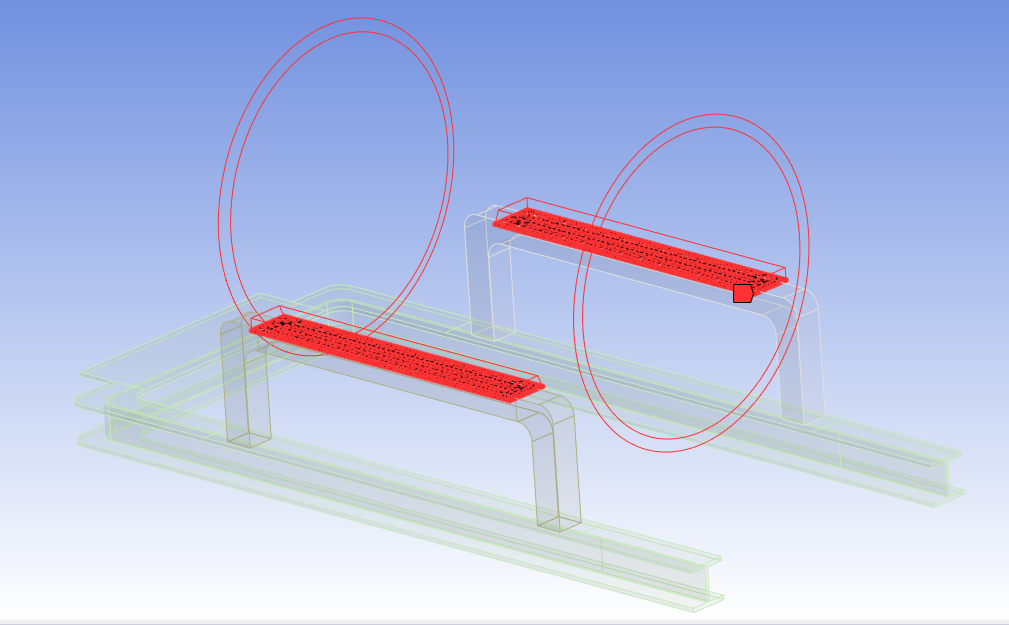 As before, these steps are repeated for all substructures that are to be attached to the larger model. This completes the second leg of the workflow.

All the same evaluation rules apply in the modal and harmonic response analyses regardless of the substructured geometries. If we had selected the "Use Pass and On Demand Expansion (Beta)" option during the Substructure Generation portion, we are may change the "On Demand Expansion" prompt to "Yes" in the Analysis Settings (in Modal). And then, when viewing deformation results in the Harmonic Response, we may select the "Scoping Method" as "Imported Condensed Part (Beta)". Doing this will allow us to see the complete contour plot of deformation for the entire model, including substructures. As of the time of this writing, viewing the contour plot for items such as stresses is not supported. 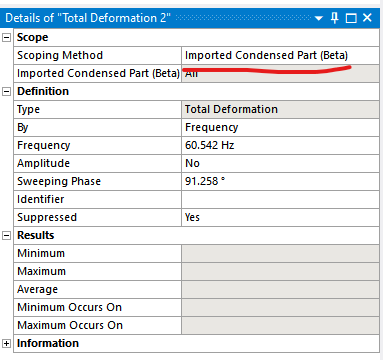 After performing such model manipulations, what have we gained? To illustrate the difference, we have performed the same analysis with the same geometry on two different models. The "Full Model" utilizes no substructuring or condensed parts. It is a direct analysis. The second model is the model we have just built using Bottom-Up Substructuring. They both produce similar results and have a good agreement in their mode shapes and natural frequencies, as they should. It was claimed earlier that substructuring could lower the computation effort of the solve. This is shown in the following table.

Bottom Up Substructuring helped us cut the solve time dramatically! Certainly, more effort was required in the model creation, but a greater savings is possible should the solve need to be reran multiple times; a situation that occurs frequently in engineering analyses.

This concludes our exposition into Bottom Up Substructuring. We at Ozen Engineering hope that it helps our fellow Ansys users achieve better results in a more timely manner for their applications. Thanks for reading.